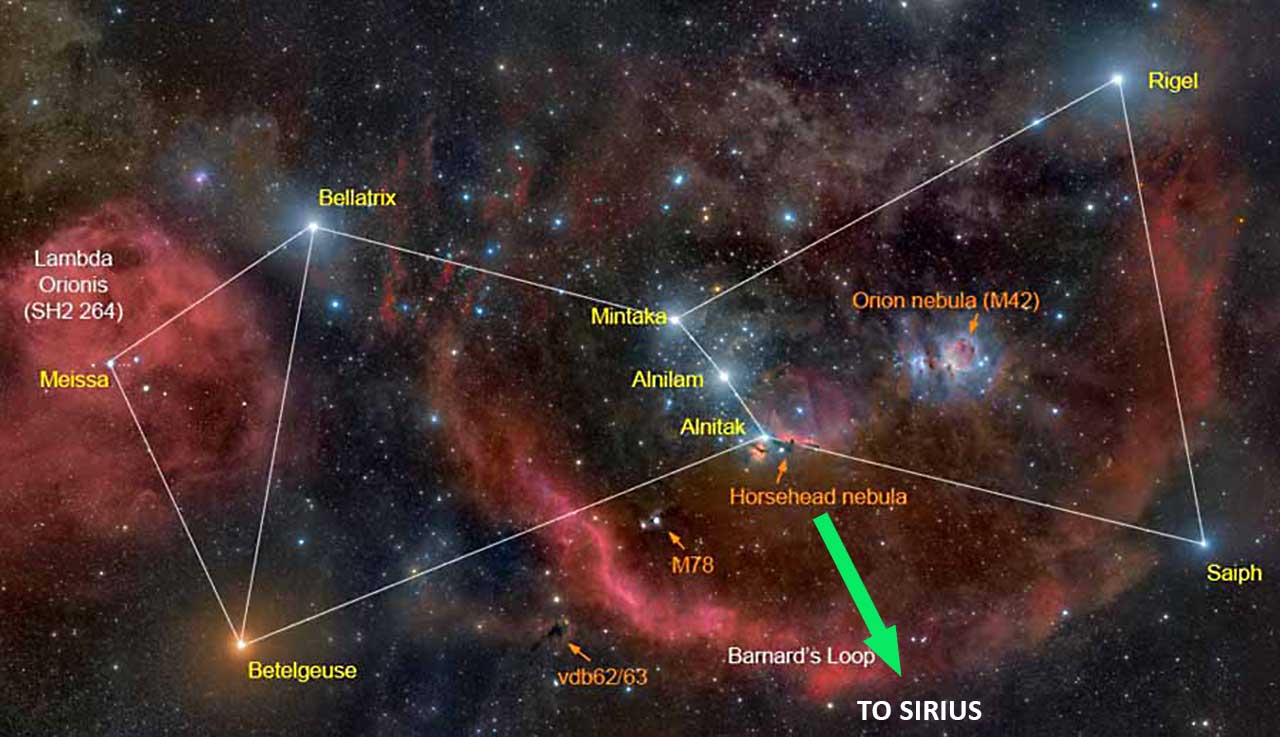 “The Seven Worlds" by Daniel Pemberton. In conjuction with Ridley Scott. For Henessy X.O. Brandy.
Above: Constellation of Orion with Orion's Belt - pointing the way to Sirius, where Donna is flying to - in the Canis Major Constellation. Donna Darkwolf. Girl with The Belt of Orion
Hidden in Plain Sight All These Years

Before Donna made her decision to dust off, we had been talking about going to Egypt. She wanted to be there one last time. Of all the places she had visited in the world, Egypt was the place that captivated her.
When she wrote: "take me to Egypt", I knew what she meant. She had said over our last dinner, joking: "Looks like you'll have to see Egypt for me. And bury me there.
I want to see the Stars".

The shirt Donna Darkwolf is wearing was designed and created by her mother.
The first time I saw it, I said to Donna: "That is the Belt of Orion", and I went on to explain the correlation of the stars to the Pyramids at Gizeh, which she had visited several times.
Now that I had pointed it out - she told me about her "Three Warrior Sisters" statuettes she had in her library. Alnitak, Alnilam and Mintaka.

Donna explained that she had bought the set and named them after the stars in Orions Belt, "because they point to the Dog Star, Sirius, in the Contstellation Canis Major.
One of the most studied constellations by many ancient cultures thousands of years ago is the constellation of Orion. Throughout the ancient world, from Egypt to Mexico this constellation has been the center of the skies for our ancestors.
Why are monuments, such as the Pyramids of Egypt mapped in such a way that these constructions mimic the skies?
Why was Orion so important? And why is it that so many monuments and structures on earth correlate with the position or movements of stars and constellations like Orion?

Orion is one of the most prominent constellations in the sky. It is best seen between latitudes 85 and -75 degrees.
Right ascension is 5 hours, and eclination is 5 degrees. The most prominent stars in the Orion constellation are Alnilam, Mintaka, and Alnitak, which form The Belt of Orion.
Betelgeuse, the second brightest star in Orion, establishes the right shoulder of the hunter. Bellatrix serves as Orion’s left shoulder.
The Orion Nebula—a formation of dust, hydrogen, helium and other ionized gasses rather than a star—is the middle “star” in Orion’s sword, which hangs off of Orion’s Belt. 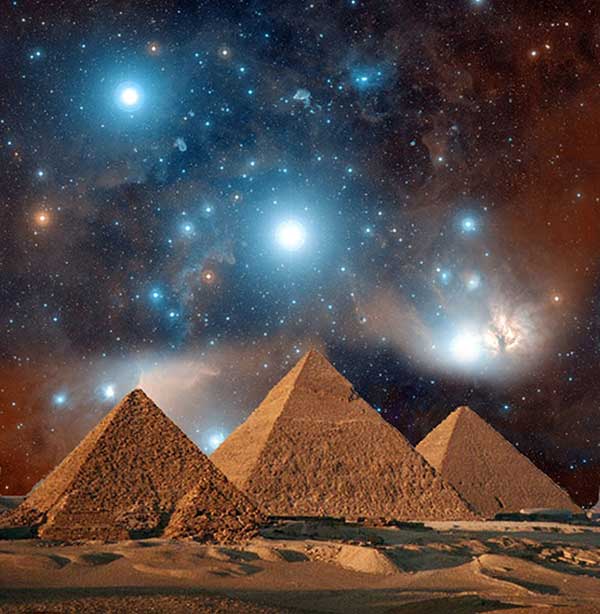 As it turns out, there is a mysterious correlation between the three main stars of the Constellation of Orion and the three main pyramids of the Giza plateau.

The pyramids at Giza are considered by many as the most mysterious structures ever built on Earth. They are both perplexing and mysterious and are a perfect example of sacred alignment since they form a what many believe is a three-dimensional map of the three main stars of Orion on the ground.

As it turns out, the builders of the Pyramids made sure to mimic the constellation as best as they could which is why when the Pyramids were built, the brightness and location of the three main stars of Orion was something that the builders took into account: The two leger Pyramids of the Giza plateau line up ‘perfectly’ with two of Orion’s stars, while the smaller pyramid of Menakure clearly follows the third star of Orion with a slight offset.

Orion is perhaps the most recognizable of all constellations, and as well as containing two of the night sky’s brightest stars, Rigel and Betelgeuse, it also straddles the celestial equator, meaning that it can be seen throughout most of the world, except near to the planet’s polar extremities. It is no wonder, then, that this picturesque constellation containing several asterisms has been revered since ancient times and has various colorful myths associated with it.

"It Is Morning, Darkwolf. I Found You. I Have Come to Fetch You - in The Morning - As Always"

Finding Donna Darkwolf on Sirius.
Sacred Meanings? You can hear the Breath of Angels - EVERYWHERE FOR ONE THOUSAND YARDS...
Get Your Stuff, Donna Mia!
We Are The Fukken Angels!
Look Lively!
WE!
ARE!
LEAVING!
Get To The WOLF!!!
RUN! Goddamit! R-U-U-U-U-N-N-N!
Stay WITH ME!
Stay WITH ME!
We GOTTA RUN!
Take MY HAND... Stay WITH ME!
RUN!
RUN! RUNNN!

NEXT >> Sirius and Orion