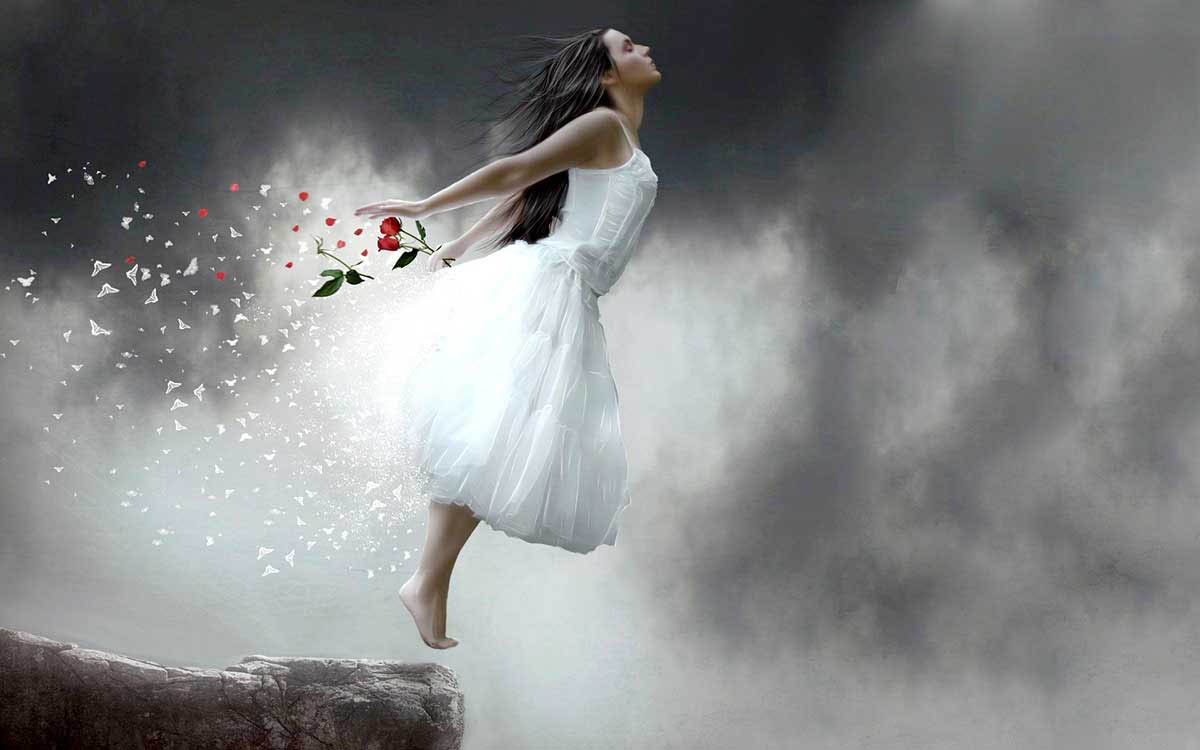 Donna's "One Wish... Give Thanks!". This was the title of her CD. But none of the tracks are labelled.
Her 'Peaceful Sunday Afternoon' music rolls out across our sunny lawn.
Donna sways gently, amongst the flowers in the breeze - in time to the chord changes.
Humming to herself. I watch her in awed silence. She just 'Glows' from within.
I am not seeing her Aura - I am watching her visibly SHINE! Like the Sun.
At One with The Universe.
Donna Darkwolf Flies with The Wind - Como Viento!

"My Moment of Release. Big Breath! I am FREEEEE! The History of My Life"

I was four years old when 'The Calling' came.

My mother will never forget that extraordinary day.
Me. . . Taking too long in the bathroom for her liking, she burst into the bathroom to find me unconscious, eyes rolled back.
I was rushed to hospital and diagnosed with epilepsy. I was never to suffer such a seizure' again.
Since I had already started reading at the age of four, I immersed myself in the biggest Bible I could find, The Saint James version.
Did I understand a word of it? Of course not! But my spirit soared when I tried to read 'holy' Scripture.

My wonderment was always that when I looked at a person. I was not seeing what I was looking at.
There was always a shimmer. And if I focussed, the person vanished. And I could see.
Every detail of their life. Their Past. And their Future.
My most surprising discovery was the existence of: 'Insincerity'.
If you can lie to a four year old child. . . well, what Lie can you Not Tell?

Imagine KNOWING all of this. And KNOWING that you will have to KNOW all of this, for all your days of your life.
It will never end.
They open their mouth and then starts A Lie of some sort. Little. Or Big. But a Lie!

By the age of eight my calling to God was intact and I vowed to never have children or marry.
Well I did marry, later in life, and had a husband who assisted me in my cause. We would later divorce because our Paths no longer crossed.
I had a phantom pregnancy in my early 30's which allowed me to experience to a small extent a woman's hormonal changes and concomitant thinking.

I begged my mother to take me to Church but she was hesitant as an ardent fan of Lobsang Rampa and other wonderful esoterica. As for my devoted father, an armchair Dutch Reformist, he did not care which way.
My wonderful parents never discouraged me from my Higher Calling although they had hoped that I would make spiritual decisions at a later age.

However the 'dominee' (minister) would not allow me in 'unattended' at the church, so I had to go to Sunday school. I lasted one morning and resigned after colouring in someone else's dream coat. All the while I could hear the dominee's powerful voice beckoning me.

I have always said that if I was a Muslim I would take Muslim theology to its highest level as a woman and then find myself at Berkley University ( California ) and reinvent my religious self to Pagan ways.

At 15 I was heavily involved in the SCA (Student's Christian Association) and evangelical outreach.

At seventeen I joined Y-ONE (Youth One year) and travelled the country extensively as an evangelist in the singing and drama team.
Upon my return, my father wanted me to choose between Psychiatry and Law, but I was firmly resolved that I wanted to be a Minister.
I was allowed to go to Bible College on two conditions:
a) I went to the Bible College of my father's choice
b) I did a Degree through UNISA correspondence simultaneously

I naturally chose Theology, much, to his dismay. I went to the prestigious Kalk Bay Bible College to do their three year Diploma.
There was a direct conflict in the teachings of the Bible from the Bible institute and UNISA.
UNISA has a liberal theological approach and Kalk Bay Bible Institute was Calvinistic in approach.
It was in fact the training ground for the Church of England. I suffered a massive existential spiritual crisis/shift. I could no longer 'feel' God. I was unable to integrate my academia with my faith.

I completed both my Diploma and my Degree and then went to UCT ( University of Cape Town ) and completed a HDLIS (Higher Diploma Library & Information Science). 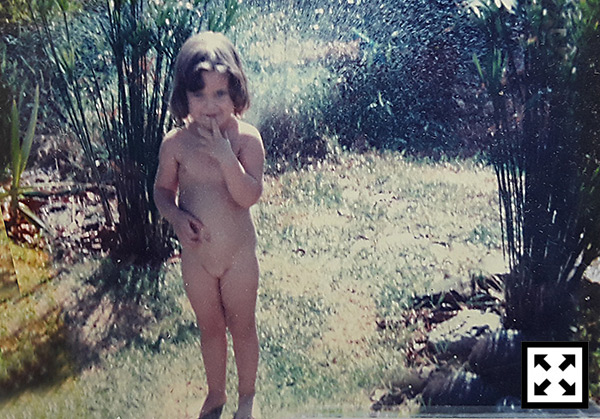 Donna Darkwolf - aged Four - The Seed of Wisdom plays in the garden sprinkler
While I am loading this picture into the page I am wondering. . .
"How many men have a photo of their wives - at age Four Years Old?"
Better still: Look at Donna's EYES! Her Expression. Her finger at her lip...
Donna is THINKING...
Her Mind is in Motion. . .
Donna is not "looking" AT you.
She is WATCHING you.
Scrutinising you. Calculating. Determining. . .
Measuring you. . . Building her Judgement. Against which there is No Appeal.
"One Lie" is all you will ever manage.

Donna sees Clear Through You. You've Just Lost. Calculate that.
You may find this notion ironic.
Trust me. You'll come around.
Try It! LIE to Her!

It is the "pensive expression"  I have observed on Donna's face countless times, when she is in conversation with someone.
A deep, penetrating gaze. Donna is Right-handed. Yet...
It is her Left hand that does the measuring. Once she touches her lip - it never moves.
Watching Donna, as her mind probes another person, is fascinating.
Left Index finger at corner of mouth. Second finger at chin. Unmoving.

Her gaze is direct. Probing. Fixing its target. Donna is WATCHING your Spirit.
Weighing your Heart with her Feather. Measuring you. She is Ma'At reborn.

You can discover more about the Egyptian Goddess, Ma'At, representing
"truth, justice" - on Wikipedia.

I now needed to join the 'real' world and start paying bills.

However, I pursued my Theological studies obtaining my Masters in Theology. I then searched for over 10 years before the Goddess called me.

I was an ordained Anglican Priestess, and as such - a licenced Marriage Officer of The State.
Meaning I could legally wed couples.

In those ten years the Zen Koans found me and satisfied much of my existential ruminations. In those days Wicca was unheard of.

I was in a second hand bookshop one day and 'per chance', picked up a book on Witchcraft. I shuddered as my Christian indoctrination crept up my spine. I hesitantly opened up the book and in an instant had an epiphany.

The Young Donna Darkwolf and Her WOLF Under Sirius 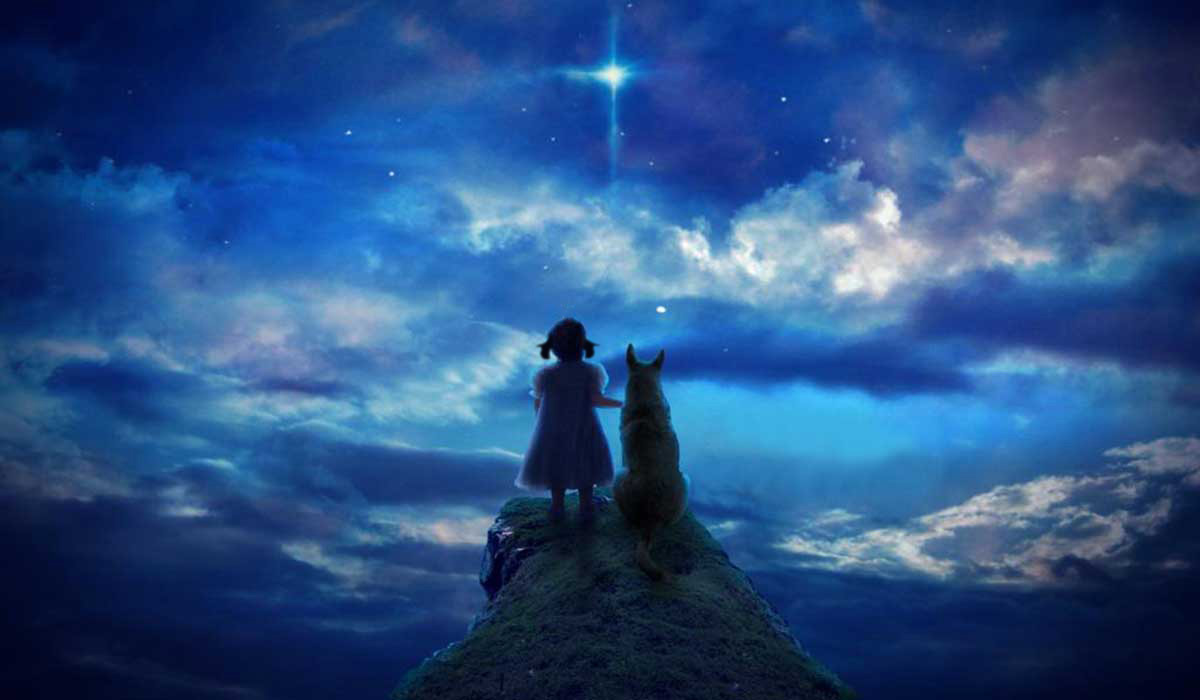 That was what my mother and I were – Witches. We did all these 'witch' things with candles, made up chants and intoned, dreamed and prophesied etc.
In Essence - Exploring and Discovering a NEW WORLD.

So, now that I had identified myself, and had 'come home'.

I deduced that there must be other people out there like me.
I could surely not be the only one.
So together with two other spiritual mavericks and after a two year national process, the PFSA (Pagan Federation of South Africa) was birthed at the Winter Solstice in Cape Town in 1996.

My already colourful religious and spiritual life took on new meaning and as I listened in awe and wonder to the tales of so many like minded people.

I started teaching, campaigning for Pagan rights, and travelling abroad to obtain first hand experience of what I was hearing about. I realized that as a South African Pagan/Wiccan I was no longer a 'second class citizen'.

I was ordained into the ATC (Aquarian Tabernacle Church – an American based Wicca church) and spearheaded its South African arm as its 'Arch Priestess'.
I handed over the PFSA to capable people and became 'President Emeritus'.

I concentrated my efforts on building a South African Wiccan Church.
However South African Pagans were not ready for such a controversial concept as a Wiccan 'church'.
After three years I decided I would no longer build someone else's vision but my own.
I resigned from the ATC and formed CAM (Circle of the African Moon) in 2001.

My vision for Circle of the African Moon is to be able to reach out and support Pagans and Wiccans in their daily lives and campaign actively for Pagan rights.
But the special place in my heart goes to all those who have suffered or are suffering deep existential spiritual crisis – Pagan or other.

My Journey has been made easier now, by the arrival in my Life, of my beautiful Soldier - whom I recently wedded.
Who says what he means - and means what he says.
When he says he will DO something. It gets DONE.
No Argument. No Negotiation. No Compromise.

I never imagined a life with a Soldier
He is not an active soldier now. But I can see that he was one once
He may have left the Army, but the Army has not left him.
He has taught me much.

"Dying is a Walk in The Park - Staying Alive Until Tomorrow? There's a Job".

"There IS no Failure! - There IS Lesson!

"When the going gets weird - The weird turn PRO".

"We went into battle to WIN! NOT to fight!"

My father was a Soldier.
Yet I never saw the Soldier. Just a kind and loving man
I never saw beyond 'Father'.

Now, I live with a Soldier. Every day
I Live With Certainty.

I live with No Lies, No Cheating, No Infidelity.
No avoiding Resposibility. No Failure to Take Ownership if he fucks up.
No Recrimination if I fuck up. No Negative statements or utterances.
Just: "Next time - why not (insert comment)".

I realise "We are not As People".
Our training has separated us from 'people'.
Forever
We cannot un-learn being... 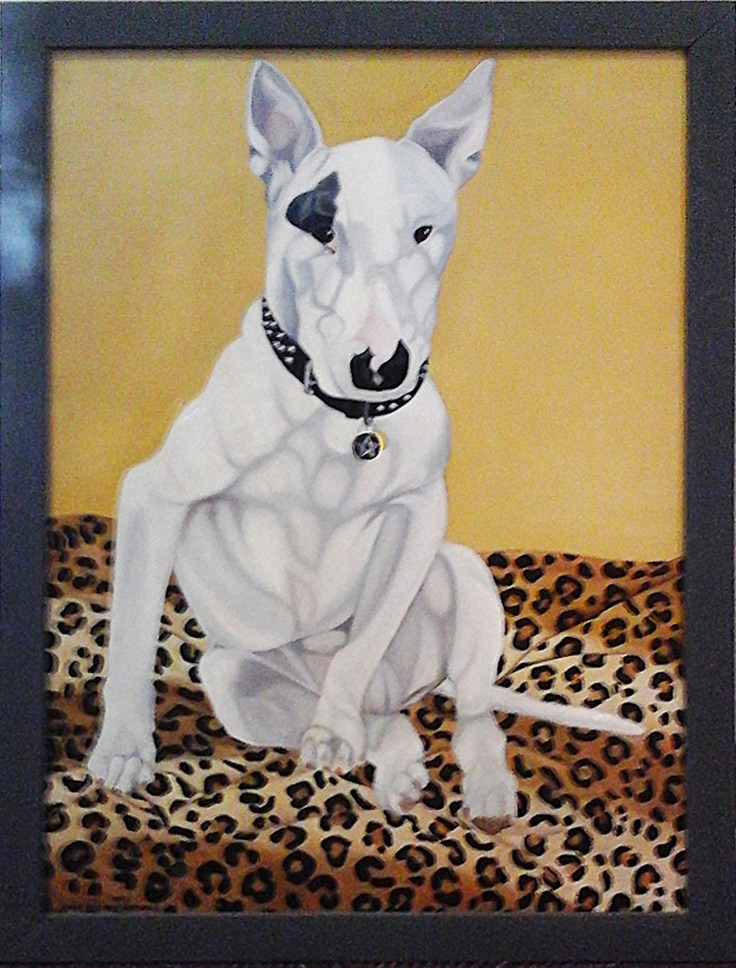 Donna Darkwolf's "BORG"
Donna's History would be incomplete without acknowledging Borg.
A happy, friendly dog who followed Donna everywhere. And when Donna was excitedly preparing for some ritual or festivity, and guests began to arrive - Borg would be there to joyfully greet them.
The Star on Borg's collar is named Sirius.  After The Dog Star. Donna had it specially fabricated by someone in her Circle that was a metal worker

And I have become that Sword. Forged for all Eternity.
Forever being polished and sharpened by Life and the Universe.
I want, and wish, to learn and experience MORE! Knowing that as
I change - I can never 'go back'. There is no 'back' button.

What ever was 'back there', is already dead.

I have REPLACED it!
And SO is Life.
Tomorrow depends on what you do NOW!
How you act NOW!
You have Three Seconds!

NEXT > In The Mouth of the Wolf - In Bocca al Lupo 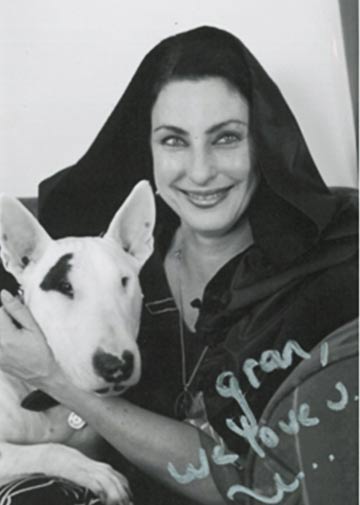 Donna Darkwolf and her cherished Borg - The Pirate
Donna generally took her dogs everywhere with her: "My Co-Pilots", she explained.
But, if she had to leave them at home, Borg would lay down at the door between the kitchen and the garage - and when he heard the gate rolling back - he would be up, and yowling:
"Woow... wooow...wooow!", tail wagging furiously - until Donna walked into the kitchen. Then JOY!